Navratri Worship – Goddess Shailputri is worshiped on the first day of Navratri.

Governing Planet – It is believed that the Moon, the provider of all fortunes, is governed by Goddess Shailputri and any bad effect of the Moon can be overcome by worshiping this form of Adi Shakti.

Origin – After Kushmanda form, Goddess Parvati took birth at the home of Daksha Prajapati. In this form the Goddess Parvati was a great Sati and her unmarried form is worshipped as Goddess Brahmacharini.

Navratri Worship – Goddess Brahmacharini is worshiped on the second day of Navratri. This avatar of Goddess Durga is particularly worshipped by the sages and monks.

Governing Planet – It is believed that Lord Mangal, the provider of all fortunes, is governed by Goddess Brahmacharini.

Iconography – Goddess Brahmacharini is depicted as walking on the bare feet. She has two hands and She carries Jap Mala in the right hand and Kamandal in the left hand.

Details – Goddess Brahmacharini did severe penance to get Lord Shiva as her husband. She performed hard austerity and due to which She was called Brahmacharini. It is stated that during her penance to get Lord Shiva as her husband She spent 1000 years on the diet of flowers and fruits and another 100 years on the diet on leafy vegetables while sleeping on the floor. Further She followed strict fasting regimen while staying at open place in scorching summers, harsh winters and stormy rains. According to Hindu mythologies She was on diet of Bilva leaves for 3000 years while She prayed to Lord Shankar. Later She even stopped eating Bilva leaves and continued her penance without any food and water. She was known as Aparna when She left eating Bilva leaves. As legends go Goddess Brahmacharini immolated herself by wishing to get a father in her next birth who can respect her husband Lord Shiva.

Navratri Worship – Goddess Chandraghanta is worshiped on the third day of Navratri.

Governing Planet – It is believed that the planet Shukra is governed by Goddess Chandraghanta. Shukra (Venus), which is the bearer of culture, luxury, and refinement in our lives.

Iconography – Goddess Chandraghanta wears the semi-circular moon (Chandra) on her forehead. The half-moon on her forehead looks like the bell (Ghanta) and because of that she is known as Chandra-Ghanta. She is depicted with ten hands.

Her aura is sparkling gold and she’s pictured with ten hands. Goddess Chandraghanta mounts on a tiger and sits upright in a posture which depicts her ready to go to war with all her weapons that she is carrying.

Goddess Chandraghanta carries Trishul, Gada, Sword and Kamandal in her four left hands and keeps the fifth left hand in Varada Mudra. She carries lotus flower, Arrow, Dhanush and Japa Mala in her four right hands and keeps the fifth right hand in Abhaya Mudra, symbolising her solemn nature. It is believed that the goddess likes milk as her offering. By worshipping Maa Chandraghanta, we activate our Manipur Chakra. Maa Chandraghanta is believed to bless her devotees with bliss, tranquility, and splendor in life.

Details – This form of Goddess Parvati is peaceful and for welfare of her devotees. In this form Goddess Chandraghanta is ready for the war with all her weapons. It is believed that the sound of the moon-bell on her forehead expel all type of spirits away from her devotees.

Origin – After taking form of Siddhidatri, Goddess Parvati started living inside the center of the Sun so that He can liberate energy to the universe. Since then Goddess is known as Kushmanda.

Kushmanda is the Goddess who has the power and capability to live inside the Sun. The glow and radiance of her body is as luminous as that of the Sun.

Navratri Worship – Goddess Kushmanda is worshipped on the fourth day of Navratri.

Iconography – Goddess Siddhidatri rides on the lioness. She is depicted with eight hands. She has Kamandal, Dhanush, Bada and Kamal in the right hands and Amrit Kalash, Jap Mala, Gada and Chakra in the left hands in that order.

Details – Goddess Kushmanda has eight hands and because of that She is also known as Ashtabhuja Devi. It is believed that all the power to bestow Siddhis and Niddhis are located in her Jap Mala. It is stated that She created the whole universe, which is called Brahmanda (ब्रह्माण्ड) in Sanskrit, by just flashing little bit of her smile. Due to this, she’s known as Aadishakti or Aadiswaroopa of the universe. Maa Kushmanda has 8 arms, which popularised her another name Ashtbhuja. She also likes Bali of white pumpkin known as Kushmanda (कुष्माण्ड). Due to her association with Brahmanda and Kushmanda She is popularly known as Goddess Kushmanda.

Navratri Worship – Goddess Skandamata is worshipped on the fifth day of Navratri.

Governing Planet – It is believed that the planet Budha is governed by Goddess Skandamata.

Iconography – Goddess Skandamata mounts on the ferocious lion. She carries baby Skanda (Murugan/ Kartikeya) in her lap. According to a legend, it’s believed that after completing her meditation Goddess Skandamata married Lord Shiva and gave birth to a boy, Skanda Kumar. Under the leadership of Lord Skanda, the deities triumphed over the demons. Lord Murugan is also known as Kartikeya and brother of Lord Ganesha. Goddess Skandamata is depicted with four hands. She carries lotus flowers in her upper two hands. She holds baby Murugan in one of her right hand and keeps the other right hand in Abhaya Mudra. She sits on lotus flower and because of that Skandamata is also known as Goddess Padmasana.

Navratri Worship – Goddess Katyayani is worshipped on the sixth day of Navratri.

Governing Planet – It is believed that the planet Brihaspati is governed by Goddess Katyayani.

Iconography – Goddess Katyayani rides on a magnificent lion and is depicted with four hands. Goddess Katyayani carries lotus flower and sword in her left hands and keeps her right hands in Abhaya and Varada Mudras.

Details – According to religious texts the sixth avatar of the Goddess Parvati took birth at Sage Katyayan’s ashram (hence her name, Katyayani) to put an end to the atrocities done by Mahishasura. The goddess has a radiant aura around her. Her magnificent color is due to the sun’s glare imbued in her.

Origin – When the Goddess Parvati removed outer golden skin to kill demons named Shumbha and Nishumbha, She was known as Goddess Kalaratri. Kalaratri is the fiercest and the most ferocious form of Goddess Parvati.

Iconography – Goddess Kalaratri complexion is dark black and She rides on a donkey. She is depicted with four hands. Her right hands are in Abhaya and Varada Mudra and She carries sword and the deadly iron hook in her left hands.

Origin – According to Hindu mythologies, the Goddess Shailputri at the age of sixteen was extremely beautiful and was blessed with fair complexion. Due to her extreme fair complexion she was known as Goddess Mahagauri.

Navratri Worship – Goddess Mahagauri is worshipped on the eighth day of Navratri.

Governing Planet – It is believed that the planet Rahu is governed by Goddess Mahagauri.

Iconography – The mount of Goddess Mahagauri as well as Goddess Shailputri is bull and because of that she is also known as Vrisharudha (वृषारूढ़ा). Goddess Mahagauri is depicted with four hands. She carries Trishul in one right hand and keeps the second right hand in Abhaya Mudra. She adorns Damaru in the one left hand and keeps the second left hand in Varada Mudra.The Goddess has a luminous moon crown on her head, also she has this aura about her, so radiant that it attracts anything & everything towards her. She has four arms, in which she carries a Conch (shank), a Chakra, a Bow & Arrow, while the fourth one is in VaradaMudra. She wears those glittering gem studded earrings, which due to her continuous motion, are always dangling & gives her an elevated look.

Details – As name suggests, Goddess Mahagauri is extremely fair. Due to her fair complexion Goddess Mahagauri is compared with the conch, the moon and the white flower of Kunda (कुंद). She adorns white clothes only and due to that She is also known as Shwetambardhara (श्वेताम्बरधरा).

Origin – In the beginning of the universe Lord Rudra worshipped Adi-Parashakti for creation. It is believed that Goddess Adi-Parashakti had no form. The supreme Goddess of Power, Adi-Parashakti, appeared in the form of Siddhidatri from the left half of Lord Shiva.

Navratri Worship – Goddess Siddhidatri is worshipped on the ninth day of Navratri.

Governing Planet – It is believed that Goddess Siddhidatri provides direction and energy to planet Ketu. Hence planet Ketu is governed by her. 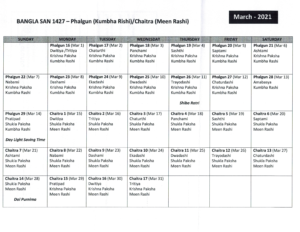